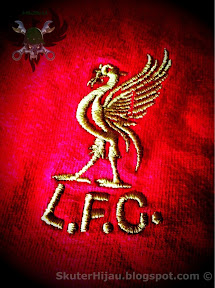 But when we do, we probably put up the best cup finals in the world.

Ataturk Olympic Stadium, Istanbul 2005 (the mother of all cup finals!)

Long may the party continue!

- Posted using BlogPress from my iPhone

Posted by Chip at Sunday, February 26, 2012 No comments:
Email ThisBlogThis!Share to TwitterShare to FacebookShare to Pinterest
Labels: Liverpool

I'm not sure about anyone else but I'd normally be slow to adapt to change especially when it involves switching between driving my car on a regular basis and then back to a scooter. Naturally, the same applies the other way around.

So, after riding around regularly on my Vespa and then switching to the car on weekends (to haul the family here and there), I would still have the tendency to squeeze in between stalled traffic. Fortunately for me (and the family), this has never happened and we've escaped becoming a three-car sandwich.

Due to the recent horrid weather, I've had to opt for the car over the Vespa in recent weeks. And then as the rest of Europe continues to freeze, Ireland started to get milder and milder. Getting sick of sitting around in traffic jams, I felt that the time (and temperature) was right to switch back to the Vespa. 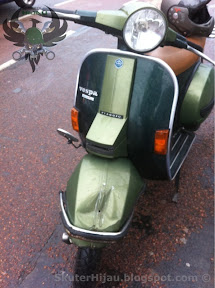 Ultimately, it was a bad decision - my mind and reflexes hadn't switched back to the level of awareness required for a scooter rider in urban conditions and so, on a damp and cold morning, my Vespa got friendly with a car. Of course, it had to be a taxi and so, what was a minor scuff mark on the taxi's bumper became a structural issue and what most would consider a nudge by my oh-so puny scooter became a cause for whiplash and all sorts of accident-related ailments.

Yes, it was entirely my fault and I was willing to pay for the damages myself but as soon as he came up with words like trauma and shock, I thought it was best to cut my losses and go down the insurance route. I'll probably be paying for it for as long as I ride a scooter but the last thing I wanted at that stage was the taxi driver getting his cabbie mates along to the party or a doctor's bill (dodgy no doubt) the size of a whole month's salary coming my way. 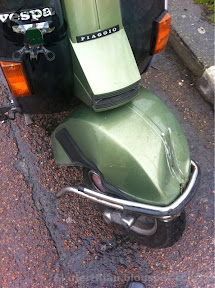 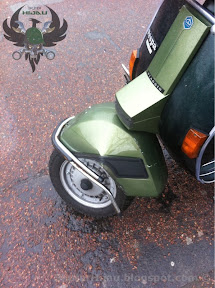 Anyway, the from the look of things, the mudguard's a write-off while I'm still waiting on news from the mechanic on whether the front fork is still safely useable. Hopefully, it'll all be sorted in the next week and I can get back to riding my scooter as soon as possible. Preferrably, avoiding wet conditions and...taxis!

A Brief Look at the Lambretta LN125

A few weeks ago, while on the way back from my weekly grocery shopping with the family, I decided to make a quick detour and head towards Bikeworld.
The shop is (officially) the local sole distributors for Vespa scooters (except that they don't sell the PX...?), LML and now the new Lambretta as well. I had seen the ads on the new LN125 but never had the chance to take a look at it myself so, I used an old excuse (I desperately needed to get some 2-stroke oil for my Vespa or else it would explode!) and managed to convince the wife to agree to the quick visit. 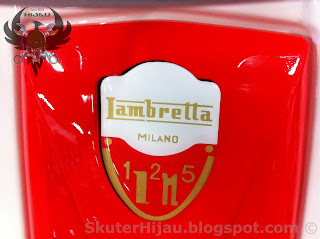 Something tells me she knows I'm not telling the whole truth but plays along with me anyway when scooters are involved. 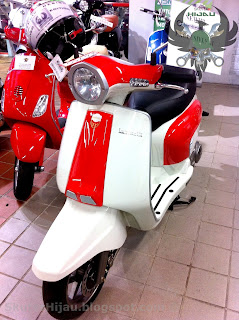 At just a couple hundred Euro below the 5,000 mark the Italian-designed, Taiwan-built Lambretta certainly isn't cheap especially for a 125cc scooter. One might argue that there's a premium to pay for the retro design and very unique badge but, it's even more expensive than a Vespa LXV125 which can be purchased brand-new for €4,250 (at the same shop too). 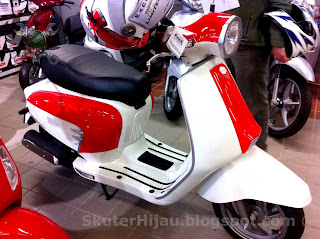 It gets even worse when compared to LML's new offering (well in Ireland anyway) - a 200cc 4-stroke PX lookalike for under €4,000. OK, it's an LML and not a Lambretta so we're comparing apples and oranges here but surely the 75cc difference in engine size makes up for what many see as a downgrade in badges? 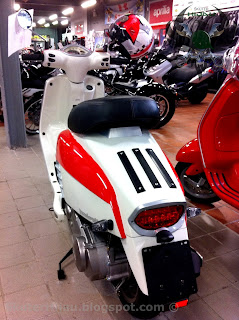 Still, I'd be very keen on this Lammie (it is after all, a Lambretta) and hopefully, I'd get a chance to give it a test drive before I come to any final conclusions.
Posted by Chip at Tuesday, February 07, 2012 No comments:
Email ThisBlogThis!Share to TwitterShare to FacebookShare to Pinterest
Labels: Lambretta, LML, Vespa
Location: Long Mile Rd, Dublin, Co. Dublin, Ireland
Older Posts Home
Subscribe to: Posts (Atom)